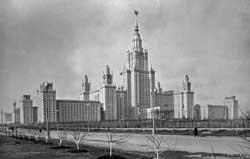 Nowadays, as it has done throughout its history, the University retains its role of a major center of learning and research as well as an important cultural center. Its academics and students follow the long-standing traditions of the highest academic standards and democratic ideals.

In March 2007 the Conference of academic councils of Moscow University approved the revised version of the Charter which aligned the document with the latest legal acts. Confirming all the rights of Moscow University proclaimed in the 1998 Charter, the updated version, approved by the Government of RF in March 2008, states the University is chartered as a federal entity, its Founder being the Russian Federation represented by the Government of RF, as originally a special status of the University was ensured by the supreme authority of its Founder, Empress Elizaveta Petrovna. The 2007 Charter stresses the leading role Moscow University has played in the development of learning, research and Russian culture, and its significance as part of the national heritage. The approval of the 2007 Charter by a special Decree of the Government is seen as a mark of recognition of the University’s outstanding achievement and merit. 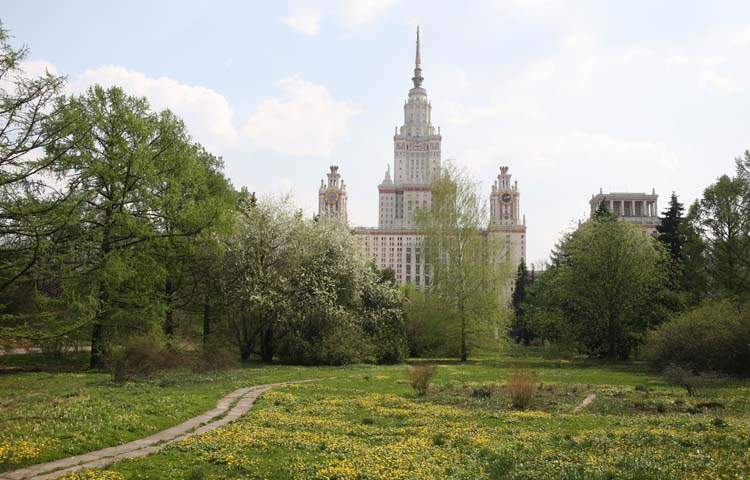 The Charter confirms that the University funding is itemized on a separate line in the federal budget; at the same time Moscow University enjoys the right for entrepreneurship and property income which is essential for the University innovative development.

According to the Charter the Conference of academic councils makes decisions concerning operation of the University as a whole and elects its Rector. Current matters are discussed by the MSU Academic Council uniting Rector and Pro-Rectors, Deans of the faculties, Directors of research institutes and centers, representatives elected by the faculties (both academics and students) and by the services. At its monthly meetings the Academic Council considers current academic and research agenda, approves changes in the University structure and its budget, grants academic titles and approves chair appointments, discusses plans for the University development. 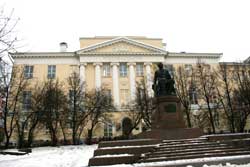 Moscow State University is a major traditional educational institution in Russia, it offers training in almost all branches of modern science and humanities. Its undergraduates may choose one of 128 qualifications in its 39 faculties, while post-graduate students may specialize in 18 branches of science and humanities and in 168 different areas. The total number of MSU students exceeds 40,000; besides, about 10,000 high school students attend various clubs and courses at MSU. Various kinds of academic courses and research work are conducted at MSU Museums, affiliated subdivisions in various locations in Russia, on board scientific ships etc.

MSU is a centre of research science famous for its major scientific schools. There have been 11 Nobel Prize winners among its professors and alumni, out of 18 Russians who have received the prestigious prize so far. Many more MSU scientists have been awarded various Soviet and Russian prizes for their achievements, among them 60 Lenin Prizes and 120 State Prizes, over 40 MSU scientists having received the State Prizes over the last decade.

Among those who teach and do research at MSU there are 2,500 higher doctoral degree holders and almost 6,000 holders of candidate degrees, the total number of professors and instructors being about 5,000; there are over 300 full members and correspondent members of he Russian Academy of Sciences and other academies.. About 4,500 scientists and scholars are currently involved in 350 research projects in various fields.

Besides its 39 faculties, Moscow University comprises 15 research institutes, 4 museums, 6 local branches in Russia and abroad, about 380 departments, the Science Park, the Botanical Gardens, The Library, the University Publishing House and a printing shop, a recreational centre and a boarding school for talented children.

A number of new faculties, departments and research laboratories have been recently established, new academic programs are being continuously introduced together with new curricula; there are over 140 distance learning programs. Research has recently started in 30 new interdisciplinary areas.

MSU as a research center 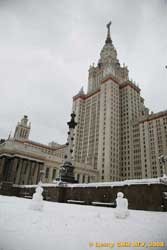 The University's scientific potential creates a unique opportunity for interdisciplinary research and pioneering work in various branches of science. The recent years have been marked by achievements in the fields of high-energy physics, superconductivity, laser technology, mathematics and mechanics, renewable energy sources, biochemistry and biotechnology. New problems to be studied by scholars often reveal themselves while they are working on various aspects of sociology, economics, history, psychology, philosophy and the history of culture. On average 800 doctoral and 200 higher doctoral degrees in various fields of science and humanities are awarded at MSU every year. 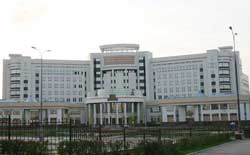 Moscow University is a major innovative center. The first Russian Science Park appeared at MSU; in the last three years about 70 small companies have been founded within the Park, they specialize in chemistry and innovative materials, biotechnology, pharmaceutics, ecology and environmental management, production of scientific equipment and instruments. The Park unites about 2,000 scientists who work to make scientific achievements into technological innovations, cooperating with business companies in the development of innovative technologies. It is in the Scientific Park that the links with leading Russian companies and potential employers of University graduates are established. Another area where links between academics and business have been successfully developing is corporation universities within Moscow University that are a model of innovative approach to tuition. Accomplished in 2006 - 2007 within the framework of the National Educational Project, the practical implementation of the approach resulted in 67 innovative Master’s Degree programs.

In 2006 Moscow University organized the first Festival of Science and Arts in Russia, similar to those traditionally held in many countries abroad. In 2007 the second Festival united around 100,000 participants and guests, becoming an all-Moscow event, while 2008 saw the Festival held all over Russia. Now it has become traditional, being held in early October every year.

Moscow University’s 250th anniversary was marked by putting a satellite into orbit; the satellite had been made by the University specialists and named “Tatiana” after the University patron saint. It allowed to discover new phenomena in the near-Earth space.

On September 17, 2009 the rocket launched from Baikonur Cosmodrome put into space the experimental research satellite named “Tatiana – II” whose mission was to observe and register transient phenomena in the upper atmosphere, thus helping to understand their nature. At the moment MSU specialists are planning to put a new and bigger satellite into orbit in 2011, marking M.V.Lomonosov’s 300th anniversary. 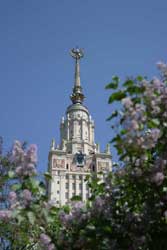 From the engineering and operational point of view Moscow University campus is an extremely complex system, with its 1,000,000 m2 floor area in 1,000 buildings and structures, with its 8 dormitories housing over 12,000 students and 300 km of utility lines. Nevertheless, this system has to be modernized and developed for the University to meet the modern requirements both as a center of higher learning and a center of research. According to the plan, approved by the government in 1987, a number of new buildings are to be erected in the area adjacent to the campus on Vorobievy Gory. Under the project (architect G.N.Tsytovitch) new blocks for a few faculties and state-of-the-art research laboratories are to be constructed, together with a library building, a swimming pool, a stadium, a recreation centre, and some services. The Main Library Building was opened in January, 2005. The 1st Humanities Building opening ceremony on the new campus was held on September 1, 2007, the new block housing Faculties of History, Public Administration, Philosophy, Political Science. The new Medical Center has been erected on the new campus as well. The “old“ campus area has been developed too, the new Economics Building being opened in 2009.

As training highly qualified specialists has always been the main goal, the faculties and departments constantly revise their curricula and introduce new programs. A number of faculties offer 4-year Bachelor’s and 2-year Master’s Degree programs, together with traditional 5-year Specialist Degree programs. Currently the stress is on student's ability to work independently and meet employer's requirements, thus practical experience in the field being of foremost importance. More classes in the Liberal Arts have been recently included in the curricula for science students, lecturers in Arts and Social Sciences giving classes on the history and culture of Russia and other countries, philology, economics, law and art for students of different faculties. The University offers individual programs combining programs and classes at different faculties.

Keeping fit is often essential for satisfactory academic achievement, thus in their first two years undergraduates have two obligatory physical training sessions a week, later they may join one of sports clubs. 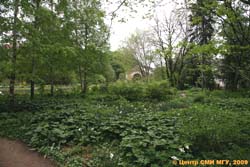 The curricula of all MSU faculties are based on the combination of academic instruction with student's research work and the combination of thorough theoretical knowledge with specific skills. Having acquired theoretical knowledge in the first and the second year, in their third year undergraduates choose an area to specialize in. At the same time they choose a field for their independent study, joining elective special seminars; the results of research are usually presented at the meetings of students' scientific societies or at scientific conferences, the most interesting results are published.

Normally, a degree program at MSU takes from 4 to 6 years to complete. At the end of the final semester the results of each student's independent research are submitted in the form of final paper, which is publicly presented by the student at the meeting of the department. 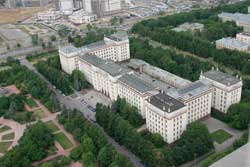 The students in most MSU programs do not pay their tuition but 15% of students whose tuition is not covered by the government funding have to pay fees. Students whose academic performance is up to the standard receive grants. Accommodation in MSU dormitories is provided for those students who are not residents of Moscow.

According to the MSU Charter, The MSU Student Board is a form of student government, coordinating various aspects of campus life and activities. At the moment there are a number of various students’ public organizations at MSU.

MSU has a long-standing tradition as a centre of retraining admitting up to 5,000 various specialists a year, highly-qualified professionals updating themselves on the latest achievements in various fields of science and humanities.

As a centre of learning, MSU publishes a wide range of scientific literature and popular editions, thus the role of the University publishing house, which was established just a year later than the University itself, can not be overestimated. Since 1756 over 50,000 scientific and scholarly, as well as literary works have been printed, both in the original languages and in translation. Thus, in the XVIII century works by Diderot, Montaigne, Rousseau, Voltaire were published, while the XIX century publications served to popularize Russian scientists and scholars. In the XX century the University publishers printed more copies of Russian classical literature and textbooks than any other publishing house in the country.

The University publishing house has received numerous awards from the Association of Russian publishers, having retained the highest position and setting the standards in the field of scientific publications.

MSU collaborates with the Eurasian University Association and has links with about 60 educational institutions, centers, unions, and universities in Europe, the USA, Japan, China and some other Asian countries, in Australia, Latin America, Arab countries. 5 MSU branch campuses have been opened in the former Soviet republics.

Since 1946, when the first international students were admitted, over 11,000 highly qualified specialists have been trained at MSU for 150 countries. Over 2,000 undergraduate and post-graduate students enroll every year, with over 400 students in the Russian / University intensive preparation programs.

Scientific and scholarly cooperation, academic and student exchange are part of university life. Receiving about 2,000 students and academics from abroad, the University sends out about the same number of its own professors, instructors and students to various countries all over the globe. Moscow University houses the UNESCO International Hydrologic School at MSU, the International Research Centre for Biochemical Technology, the International LASER Centre, the Center for International Education , courses and seminars on Russian as a foreign language.

Scientific and scholarly cooperation, academic and student exchange are part of university life. Receiving about 2,000 students and academics from abroad, the University sends out about the same number of its own professors, instructors and students to various countries all over the globe. Moscow University houses the UNESCO International Hydrologic School at MSU, the International Research Centre for Biochemical Technology, the International LASER Centre, the Center for International Education , courses and seminars on Russian as a foreign language.