The role of the faculty became crucial after this country opened up to the rest of the world, which gave Russians the opportunity to communicate and co-operate with foreigners in every sphere of life, and the demand for foreign language teaching grew very quickly.

Foreign language being a means of communication for specialists in various fields, the faculty aims to improve the standards of foreign language teaching. But the fulfillment of this seemingly limited task has involved a number of issues, including some scholarly, academic and social aspects.

As a faculty we work in a number of areas related to foreign language teaching. First of all, it is the development and validation of LSP teaching methods in various specialist areas, which presupposes studying language functioning in various branches of science, engineering, economy, and culture. Our task is also the development of modern methods to train foreign language teachers, translators and interpreters and experts in cross-cultural communication.

From the very beginning our research work at the Faculty of Foreign Languages has been mainly devoted to studying the functions of language in all spheres of the life of society, its role as a means of communication and cognition, and as an instrument of culture.

As the connection between the language and the life of the people who speak it has been well-established, we believe in studying foreign languages in broad social, political and cultural contexts. Our main principle is teaching not only linguistic theory and certain language skills, but introducing our students to the culture and civilization of the people whose language they study. We teach language and culture, language and thought, language and the picture of the world, languages in contact, cultures in contact and cross-cultural communication. Besides, we believe it is profound knowledge of our students’ mother tongue, of Russian culture and the history of Russia that is essential for their successful international contacts. That is why our curriculum includes courses of the Russian language and Russian culture which are compared with foreign languages and cultures.

Our students study modern European languages: English, German, French, Spanish, Italian, Bulgarian, Czech, Polish, Serbian. They acquire not only theoretical linguistic knowledge and practical language skills, but also a deep understanding of the world of the languages they study. It means that our graduates can apply their knowledge almost in every sphere, as the contemporary world is big and small at the same time, so good knowledge of languages and experience in intercultural communication are the open sesame even to the heaviest doors.

Specializing in the field, students combine their profound knowledge of a certain country or region, on the one hand, with fluency in two or more foreign languages, on the other. The curriculum includes courses in various aspects of life in a certain region: students study its history, population, economy, culture, literature, religion, law, ethnology and political history.

A specialist in area studies is a consultant on a certain region or country and, at the same time, a translator/ interpreter. Our graduates work for the Russian Ministry of Foreign Affairs, Russian and international companies, in research centers, educational institutions, etc.

The Division of Cultural Studies was established in 2009 on the basis of the Department of Comparative Literature and Cultural Studies. Our full-time 5-year Specialist’s Degree Program in Cultural Studies is aimed at training analysts, instructors and managers in various areas of art, literature, music, and specialists in the history of the Occidental and Oriental cultures. 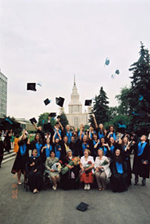 We offer full-time 4-year Bachelor’s Degree program and 2-year Master’s Degree program in Linguistics to international students interested in the Russian language and Russian Studies. These degrees provide a background for those students who wish to work toward a doctoral degree, which can be completed in three academic years.

We also offer short-term (one to nine months) internship programs.

Our baccalaureate programs have proved to be the most popular among our international students majoring in Russian and usually choosing English as their minor language. The curriculum gives the students a well-rounded background, with area studies in addition to the major and minor language courses. At the same time, students are immersed in the Russian language and culture. Their learning activities include field trips, site visits and walking tours around Moscow and in the Moscow Region. We foster cross-cultural experiences on campus for our domestic and international students.

Our short-term Russian-as-a-foreign-language programs include (but are not limited to) an intensive language course, from 8 to 20 hours in class a week. International students on all the programs are to pay tuition fees.

About 35 faculty professors go to lecture abroad every year, and we have student exchange programs with the USA, Austria, Germany, Great Britain, France, Belgium, Spain, the Czech Republic, Italy, Poland.

The Faculty of Foreign Languages and Area Studies has double degree programs with London Metropolitan University and the University of Coventry, our students receiving both Specialist’s Degree from Moscow State University and BA or MA from a British University.

At the moment we have a joint project with The State University of New York (SUNY), our students being able to earn degrees from both universities enjoying all the rights and privileges of both MSU and SUNY.

Since 2007 we have had a double degree program with Rotterdam School of Management, the Netherlands.

Our double-degree program alumni work for Russian and foreign organizations and companies, for travel agencies, the mass media and in advertising. Some of them go to postgraduate school either in MSU or abroad, working towards Master’s or Doctor’s degrees in their specialist areas.