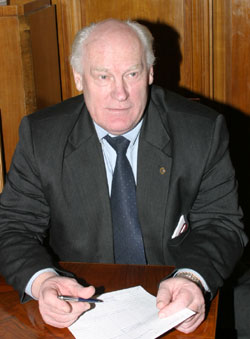 Head of "The 250th Anniversary of MSU" Committee

Born: November, 8 1940 in Briansk. Graduated from the Faculty of Mechnics and Mathematics of MSU (1961). Specialisation: mathematician.

Alexander Mikhalyov is a recipient of the Premium of the USSR Council of Ministers for Applied Research (1982), full member of the International High School Academy (1996) and the Russian Academy of Natural Sciences (2002), the recipient of Presidential research grants. In 2003 he was entitled the Honorary Scholar of Russian Federation.

Doctor’s Thesis: "Endomorphisms of modules and the Multiplicative Structure of Rings".

He has been a research supervisor to 69 seekers of Candidate Degree, 9 seekers of Doctor Degree.

He is the author of more than 250 publications, including 9 monographs and 10 textbooks.