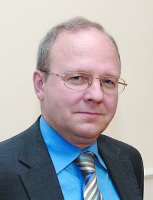 Vice-Rector. Head of Department for Innovations and International Cooperation

Head of Laboratory of Physical Chemistry of Polymers, Nesmeyanov Institute of Organoelement Compounds, RAS (1991); Chair of Polymer Physics and Crystallophysics of MSU Faculty of Physics (1993). Head of the Polymer Council of RAS (2002), Member of the Advisory Council on Science, Education and High Technologies for the President of Russian Federation (2008). Alexei R. Khokhlov has been awarded Lomonosov Prize for Pedagogical Achievements(2005), Russian National Award in Science and High Technologies (2007) and a number of other Russian and foreign prizes.

Member of Academia Europaea (2000), Honorary Professor of a number of foreign universities.

Alexei R. Khokhlov is the head of a scientific school, the author of textbooks widely-known both in Russia and abroad. The range of his interests covers polymer science, statistical physics of macromolecules, physical chemistry of polyelectrolytes and ionomers, microphase separation in polymer systems, polymer liquid crystals, polyelectrolyte responsive gels, topological restrictions in polymer systems, dynamics of concentrated polymer solutions and melts, coil-globule transitions, associating polymers, computer simulation of polymer systems, biomimetic polymers, proton-conducting polymer membranes. His publications include works on both theoretical and experimental science, some of the former being classical in the field. Among others, he has proposed methods to synthesize “protein-like" copolymer sequences as well as macromolecules whose functional properties can be pre-set. The theoretical principles he developed have been successfully implemented in the field of oil extraction, in production of durable biocompatible polymers and new efficient catalysts to synthesize vitamins.

He is a member on a number of editorial boards and Editor-in-Chief of the Russian journal “Vysokomolekularnie Soedinenia” (High-molecular weight compounds).