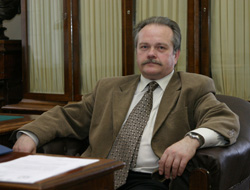 Pyotr V. Vrzheshch is a specialist in the field of kinetics of enzyme reactions, having delivered lectures on the subject at the Faculty of Biology, the Faculty of Chemistry, the Faculty of Bioengineering and Bioinformatics, at MSU International Research Centre for Biochemical Technology. Having discovered a new type of bioactive substances, he is currently interested in biotechnological antitumor and antithrombotic agents and methods to produce them

He has published over 100 works, including 3 monographs. He has patented a few inventions.

He has been scientific adviser to 4 Candidates of Chemistry.

Pyotr V. Vrzheshch is a member of MSU Academic Council, Head of the Academic Council at the International Research Centre for Biochemical Technology and at the Faculty of Bioengineering and Bioinformatics, a member of two other academic councils at MSU. He is Academic Secretary of MSU Public Lecture Program Board, Member of the Presidium and Head of the Secretariat of Moscow Society of Naturalists.