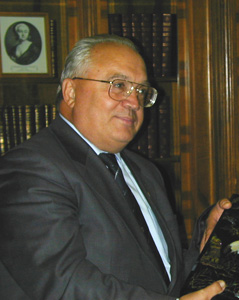 For over 30 years, Victor Sadovnichy has been teaching such foundation courses in Mathematics as "Mathematical Analysis", "Functional Analysis" etc., at the MSU Mechanics and Mathematics Faculty. Victor Sadovnichy is a founder and the head of the Moscow seminars on the spectral theory (1967). Victor Sadovnichy is a prominent expert in Mathematics, Mechanics and Computer Science areas. His research activity is focused on mathematical modeling and mathematical methods of information processing. He has made a considerable contribution to the development of Spectral Theory of Differential Operators by arriving at final conclusions in the theory of differential operators' traces that have become a part of the respective sections of modern functional analysis. Under his supervision a number of mathematical methods of space information processing that allowed to advance in solving the problem of deciphering (image recognition) of space survey have been developed. He has made important findings in mathematical justification of some approaches in relativist gravitation theory. He has developed a new approach to analyzing complex processes - dynamic simulation of controlled flights and movement, specifically, directing the flight of a spaceship and a flight vehicle. He is the author of unique developments of mathematical support of simulators, which allowed, for the first time in the history of space science, to carry out an end-to-end consequent simulation modeling of all stages of aerospace flight, including the zero-gravity phase. These simulators were used in pre-flight training by more than fifty Russian and foreign astronauts.

Victor Sadovnichy has carried out research in mathematical theory of complex systems - one of the most significant and at the same time difficult, in terms of mathematics, areas of modern natural sciences. V. Sadovnichy supervised the research project "Motion control during sensor problems in microgravity and information support of maximal visual stabilization quality control of space object" that was distinguished with a Russian State Award in 2001.

Victor Sadovnichy has supervised dissertation research of 65 Candidates of Science and 15 Doctor of Science, including scientists from Yugoslavia, Bulgaria, Algeria, Egypt and other countries. He is the author of over 450 academic publications, including 60 monographs and textbooks widely used in universities both in Russia and abroad, such as the textbook on functional analysis "Theory of operators" (several editions), classic calculus textbooks "Calculus" (co-authored in two volumes), "A Course in Calculus" (in two volumes), three-volume calculus problem book and two problem books that summarize the experience of all Math Contests for university students. His publications also include such renowned monographs as "Dynamic Simulation Math Problems", "Spectral analysis of multi-particle Schrodinger operator" etc.

Victor Sadovnichy was elected Rector by the MSU Council of Academic Councils at the first democratic rector elections on March 23, 1992. At the next elections (1996, 2001 and 2005) he was reelected. He was appointed rector of Moscow State University (2009, 2014) by President decree. During his office, Moscow State University was granted a status of Russian self-governing (autonomous) higher education facility (1992), the St. Tatiana Chapel was reopened (1995), a new MSU Charter was adopted (2008) and the following new faculties were created:

Victor Sadovnichy is married and is a father of three children.